Elder care with technology appeals most to Baby Boomer women
Two thirds of 55-75 year olds would be interested in using technology to help their parents as they get older. Help with medication, memory, fall detection, instant communication and health metrics such as blood pressure and heart rate were liked, but people questioned were much more wary of tech for dressing, eating and personal care.

In 2020health’s paper out today Health technologies – are older people interested? 700 baby-boomers were asked about their willingness to use innovation in caring for their parents, only when it came to dressing did fewer than half think they wouldn’t want to use it. Fascinatingly, given that so much tech publicity is geared towards men, often women were more likely than men to be happy to use technology.

Julia Manning, Chief Executive of 2020health, which undertook the survey, said: “We are much more accepting of tech solutions to help with daily living and the tech sector needs to realise that women are much more interested in digital solutions than they think. If you pick up a technology magazine, all the advertising is directed at men!”

Robotic assistance for dressing is being pioneered in Japan, where one in eight people are over the age of 75. Although people were generally more wary of robotic help, women were 20 per cent more interested in using it for their ageing parents, compared with men. In the UK, competitions such as the annual AXA PPP sponsored Health Tech & You Awards, held in April, show that the new assistive technology space is growing rapidly. Innovation such as the GyroGear Steady Glove assists people by counteracting hand tremors; Dermaspray is a devise that sprays precise doses of medication for those with reduced hand movements and, for those with walking difficulties such as in Parkinson’s, ‘Walk with Path’ is an aid simply [to] taking the next step. 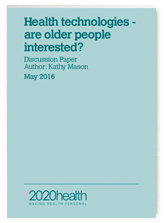 “The more access we can get to innovation, new technologies and ingenious solutions, the more we can offer people healthy options using technology,” said Gordon Henderson, Director of Digital & Innovation, AXA PPP healthcare.

2020health, AXA PPP and the Design Museum are founding partners of the Health tech and You Awards, an annual competition to showcase the best consumer facing, digital health technologies.