Obamacare: No NHS but still a healthcare revolution

As we have seen the US healthcare system was before Obamacare a mixed system and not some lassiez-faire dystopia or utopia. It included extensive ( often state level) regulation, a programme providing health insurance for the elderly ( Medicare), a programme providing one for the poor (Medicaid), other programmes providing healthcare  and a requirement imposed by the US federal government  for hospitals to provide emergency care regardless of ability to pay. At the same time it was very different from the NHS including having very little government ownership and employment in the medical sector.

Obamacare keeps these features. It does not increase government ownership nor provide a guaranteed government healthcare entitlement to all on the NHS model.  Attempts to set up a ‘public option’ (that is a health insurance plan run by the government) were removed from the final bill under pressure from moderate Democrats. Even the estimates by supporters of the bill do not think it will raise health insurance ‘coverage’ (in the form of being in a health insurance programme  – not the same necessarily  as actual healthcare of course) to 100%. Indeed there’s a fair case it does not make the US system anymore like the UK one –remaining just as different even if Obamacare comes fully into effect.

However if and when Obamacare comes into full effect it will nonetheless radically change the nature of the US healthcare system. It does this chiefly through massive changes in the regulatory environment of US healthcare to exert much tighter control of private healthcare.  In a sense it is an attempt to transform the companies that provide health insurance and coverage to something much closer to regulated public utilities.

Possibly the most important aspect is ‘community rating’ that is forcing companies to offer health insurance for adults at the same price regardless of lifestyle and health problems. Exceptions are made for geography, age and tobacco usage (the last being the only lifestyle exception the same is not true of others like obesity, nature of job or sexual behaviour ). This is combined with ‘guaranteed issue’ whereby insurance companies can not reject anyone seeking health insurance.

The second key aspect of Obamacare is the definition of a package of ‘mandated benefits’ whereby health insurance must include certain elements (already a strong element of the US system but mostly at the state level). This (like a great deal of the bill) partly follows on from community rating- if you say people cannot charge more for the same product, the product itself has to be defined. The bill itself only defines  somewhat general and non exhaustive categories e.g. ‘hospitalization’, many of the  details of what is entailed are going to be made (by executive order and regulation) over the next few years before that element of the bill comes fully into effect (2014). This also includes requiring parent’s insurance coverage to cover their children up to the age of 26-one of the most popular aspects of the reforms.

These aspects of the law massively increase the risk of ‘adverse selection’ .They would make it financially worthwhile for people to only sign up to healthcare when they’d get more healthcare paid for than they’re paying in insurance (since they can join anyway at the same price) thus bankrupting the health insurance industry and health providers   That helps explain another aspect of the law which is possibly the most unpopular with the public, the individual mandate. This compels people to buy health insurance or be fined/ taxed, some are almost certain to do the latter which will have the effect that health insurance coverage will still be less than 100%. There is also a somewhat softer ‘employer mandate’ whereby employers with more than 50 employers have to provide health insurance or pay fines.

The biggest Obamacare controversy this year has been a ‘contraception mandate’ whereby all health insurance would include birth control. It helps illustrate how the basic structure of Obamacare works. If the provisional regulations stand contraception would be included in the mandated benefits – w 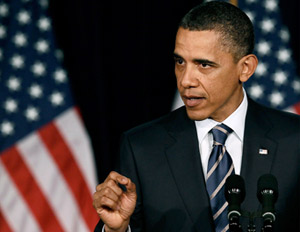 hich means everyone’s health insurance would include contraception cover ( including  those who did not wish to purchase it because =sexually inactive,  trying to have children etc)  even if they believed they could gain a better price by paying out of pocket as many argue is the better case for contraception. The implication in the context of the law is those who don’t and won’t use contraception will cross subsidise those who do, and the same will be true of any other procedures covered.  The most controversial aspect has been  that it means any employer  (apart from houses of worship)  offering health insurance has to include contraception in the coverage-including many Roman Catholic charities who object to contraception on religious grounds. If they don’t provide health insurance in protest they will be fined.  Thus (in a way that is certainly not true of the UK) Catholic organisations are being required to provide contraceptives. This is obviously one small part of the overall legislation but shows the potential for enormous political wrangling about almost any aspect of social policy the legislation opens up, for example over medical procedures some people disapprove of or consider useless and so forth.

In combination these core aspects of the law have the effect that when and if  Obamacare is fully implemented health insurance will be available on the same terms regardless of usage and risk, it’s composition will be set by the government and fines will (at least in principle) ensure that nonetheless take up is nearly universal.  It’s not clear that  ‘Going private’ in terms of insurance (as opposed to paying out of pocket) in the sense that  is possible in the UK healthcare system would be an option.

These policies form the conceptual core of Obamacare but it has included other aspects that are important but do not represent the same fundamental shift in the nature of the US healthcare system. This includes a limit on the amount spent on administration by health insurance companies of 85% and  a new board (IPAB) is also created to play a role in setting Medicare benefits, a move regarded with great suspicion by doctors.

Unsurprisingly the law also includes a great  deal of new subsidies particularly for those with low incomes (up to 400% of the federal poverty line) but well off enough to be ineligible for Medicaid and small business’s purchasing for their employers. These subsidies are tapered according to income. Medicaid itself is expanded so those eligible nationally are those up to 133% of the federal poverty level. There are also subsidies for those with pre-existing conditions set up (though only for a transitory period before the bans kick in).

There are also various cuts in existing expenditures and new taxes, mainly motivated by pressure from moderate Democrats when the legislation was passed to prevent the law increasing the budget deficit in terms of the Congressional Budget Office calculations (themselves controversial and partly renounced in the case of the social care element which was abandoned because it could not keep to it’s numbers). In particular, new restrictions are imposed on the use of Medicare funds for private HMO coverage and a new tax is proposed on lavish private ‘Cadillac’ plans. Many experts are sceptical this last will actually happen. There are also various taxes including some such as on medical devices produced in the US which look likely to be repealed after being accused of damaging US industry and exports.

Two important points on the implementation of the law could stop parts of it coming into effect. One reason is that the full implementation of the law is subject to a complex timetable. For example the core insurance market reforms only fully come into effect in 2014 and the ‘Cadillac tax’ in 2018. A second and related aspect is that different bits of the law could be attacked before or after coming into effect either in congress, or by executive waivers or by judicial rulings. For example the individual mandate is being challenged in the supreme court as unconstitutional (m

ainly on the basis that the federal government has no power to compel people to buy a product). If that were overturned  then the problem highlighted above that only ill people would take out health insurance could come into effect potentially  bankrupting the insurance industry (and indirectly the healthcare industry)  and probably strengthening efforts at repeal . Similarly the implementation of the ‘ mandated benefits’ section depends a great deal on regulation- a Republican president could easily lead to a much less looser set of rules for requirements and all the GOP candidates for president are pledged to do so.

Obamacare is potentially vulnerable to political attack and not just because of the degree of popular opposition. A large part of the problem is that at its core lies a number of linked concepts, community rating, guaranteed issue, mandated benefits and the individual mandate. If one of them is removed from the system the whole framework of the reform totters.

2 Responses to Obamacare: No NHS but still a healthcare revolution