At 6 am this morning the BBC were reporting that RCGP Chairwoman Clare Gerada had said pharmacists should not be allowed to sell the ‘flu jab. This is the story in the 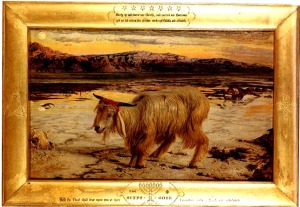 Telegraph. By 7am this had changed to saying that she hadn’t said that, but she had said that vulnerable people should have their jabs before the ‘worried well’ and the BBC website story was duly changed. Isn’t the real story that many GPs have under-ordered their supplies of ‘flu for their patients as they oversee their own orders and some of them have been giving them to the worried well instead of keeping them for their ‘at risk’ patients? Pharmacists will have ordered their flu jabs quite separately and it feels like they are being made the scape goat.

Which reminds me, the story that got my goat at the weekend was the unbelievable price some parents were charged for their daughters glasses. They had been referred to an ophthalmologist at Great Ormond Street who found that their daughter had a problem with focusing. This is not unusual and a good optician such as those here would have been able to work that one out – I was prescribing bifocals to children for this sort of problem 20 years ago. The scandal is being charged £400 for the glasses when most opticians would have supplied them for free – not charge any cost to the patient, simply submit the NHS (or Hospital Eye Service) voucher to cover the cost! Patients can always top up for a fancier frame – but £400 – for a 9 year old’s glasses! They were fleeced!

failed to capture the importance to UK economic growth of making the running of clinical trials easier. See my post here for why this report is crucial.

Julia is a social pioneer, writer and campaigner. She studied visual science at City University and became a member of the College of Optometrists in 1991, later specialising in visual impairment and diabetes. During her career in optometry, she lectured at City University, was a visiting clinician at the Royal Free Hospital and worked with Primary Care Trusts. She ran a domiciliary practice across south London and was a Director of the UK Institute of Optometry. Julia formed 20/20Health in 2006. Becoming an expert in digital health solutions, she led on the NHS–USA Veterans’ Health Digital Health Exchange Programme and was co-founder of the Health Tech and You Awards with Axa PPP and the Design Museum. Her research interests are now in harnessing digital to improve personal health, and she is a PhD candidate in Human Computer Interaction (HCI) at UCL. She is also dedicated to creating a sustainable Whole School Wellbeing Community model for schools that builds relationships, discovers assets and develops life skills. She is a member of the Royal Society of Medicine’s Digital Health Council. Julia has shared 2020health's research widely in the media (BBC News, ITV, Channel 5 News, BBC 1′s The Big Questions & Victoria Derbyshire, BBC Radio 4 Today, PM and Woman's Hour, LBC) and has taken part in debates and contributed to BBC’s Newsnight, Panorama, You and Yours and ITV’s The Week.
View all posts by Julia Manning →
This entry was posted in NHS, Public Health and tagged Clare Gerada, flu, glasses, pharmacists, Vaccines. Bookmark the permalink.