After nearly six years of waiting in the wings, Andrew Lansley will today arrive at 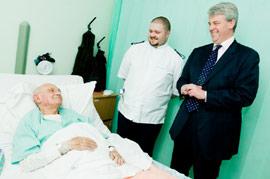 Richmond House, home of the Department of Health on Whitehall, at last able to get his feet under the desk as the new Secretary of State for Health. He comes with unprecedented experience have been in the shadow post for so long, and well developed relationships with many of the key players in health and social care. As a former civil servant, he will have been able to well anticipate the layers of bureaucracy that await him and we hope, be arriving armed with his pruning gear. And it will be fascinating to see who his team now turns out to include although all of his shadow health ministers excelled in their briefs and to lose any of them will be a great shame. Let’s see what the day brings!

Julia is a social pioneer, writer and campaigner. She studied visual science at City University and became a member of the College of Optometrists in 1991, later specialising in visual impairment and diabetes. During her career in optometry, she lectured at City University, was a visiting clinician at the Royal Free Hospital and worked with Primary Care Trusts. She ran a domiciliary practice across south London and was a Director of the UK Institute of Optometry. Julia formed 20/20Health in 2006. Becoming an expert in digital health solutions, she led on the NHS–USA Veterans’ Health Digital Health Exchange Programme and was co-founder of the Health Tech and You Awards with Axa PPP and the Design Museum. Her research interests are now in harnessing digital to improve personal health, and she is a PhD candidate in Human Computer Interaction (HCI) at UCL. She is also dedicated to creating a sustainable Whole School Wellbeing Community model for schools that builds relationships, discovers assets and develops life skills. She is a member of the Royal Society of Medicine’s Digital Health Council. Julia has shared 2020health's research widely in the media (BBC News, ITV, Channel 5 News, BBC 1′s The Big Questions & Victoria Derbyshire, BBC Radio 4 Today, PM and Woman's Hour, LBC) and has taken part in debates and contributed to BBC’s Newsnight, Panorama, You and Yours and ITV’s The Week.
View all posts by Julia Manning →
This entry was posted in Andrew Lansley, Department of Health and tagged Department of Health, New Government. Bookmark the permalink.